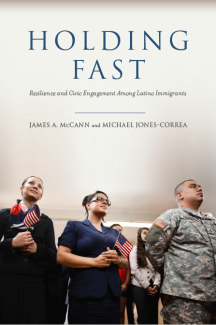 The 2016 election of Donald Trump prompted a surge in anti-immigrant sentiment which threatened DACA and other progressive immigration policies. In Holding Fast: Resilience and Civic Engagement Among Latino Immigrants,political scientists James McCann (Purdue University) and Michael Jones-Correa (University of Pennsylvania) investigate whether and how these recent shifts have affected political attitudes and civic participation among Latino immigrants.

Holding Fast draws largely from a yearlong survey of Latino immigrants, including both citizens and noncitizens, conducted before and after the 2016 election. The survey gauges immigrants’ attitudes about the direction of the country and the emotional underpinnings of their political involvement. While respondents expressed pessimism about the direction of the country after the election, there was no evidence that they withdrew from civic life. Instead, immigrants demonstrated remarkable resilience in their political engagement, and their ties to America remained robust. McCann and Jones-Correa examine Latino immigrants’ trust in government as well as their economic concerns and fears surrounding possible deportations of family members and friends. Addressing the potential influence immigrant voters may wield in in the 2020 election, the authors point to signs that the turnout rate for naturalized Latino immigrants may be higher than that for Latinos born in the United States. The authors underscore the importance of the parties' platforms and policies, noting the still-tenuous nature of Latino immigrants’ affiliations with the Democratic Party.

Holding Fast outlines the complex political situation in which Latino immigrants find themselves today and provides a nuanced, thoughtful outlook on the future of Latino civic participation. It is an important contribution to scholarly work on civic engagement and immigrant integration.

Read more and purchase a copy of the book.

Click here to watch a webinar discussion with the authors about the book’s findings and their political implications.

© 2021 The Trustees of the University of Pennsylvania
Penn Weblogin