The Substance of Representation Congress, American Political Development, and Lawmaking

Lawmaking is crucial to American democracy because it completely defines and regulates the public life of the nation. Yet despite its importance, political scientists spend very little time studying the direct impact that the politics surrounding a particular issue has on lawmaking. The Substance of Representation draws on a vast range of historical and empirical data to better understand how lawmaking works across different policy areas. Specifically, John Lapinski introduces a theoretically grounded method for parsing policy issues into categories, and he shows how policymaking varies in predictable ways based on the specific issue area being addressed.

Lapinski examines the ways in which key factors that influence policymaking matter for certain types of policy issues, and he includes an exhaustive look at how elite political polarization shifts across these areas. He considers how Congress behaves according to the policy issue at hand, and how particular areas--such as war, sovereignty issues, and immigration reform--change legislative performance. Relying on records of all Congressional votes since Reconstruction and analyzing voting patterns across policy areas from the late nineteenth to late twentieth centuries, Lapinski provides a comprehensive historical perspective on lawmaking in order to shed light on current practices.

Giving a clear picture of Congressional behavior in the policymaking process over time, The Substance of Representation provides insights into the critical role of American lawmaking.

John S. Lapinski is the Robert A. Fox Professor of Political Science at the University of Pennsylvania and the director of elections for NBC News. He is the coeditor of The Macropolitics of Congress (Princeton). 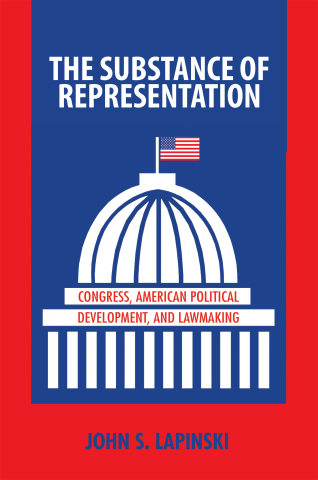